Quinolones are one of the most commonly prescribed classes of antibiotics used to treat various bacterial infections in humans and domestic animals. Quinolones that contain additional fluorine atom in the core structure are called fluoroquinones. Both of these antibiotics can kill bacteria by inhibiting DNA gyrase in gram-negative bacteria or topoisomerase IV in gram-positive bacteria. However, excessive quinolone or fluoroquinolone in foods or drinks can pose a serious threat to humans as it may cause central nervous system toxicity, blood disorders, tendonitis, brain, liver and gastrointestinal dysfunction. As a consequence, it is important to monitor their levels in food products such as in meat and milk. The traditional techniques/instruments (HPLC or GC-MS) for detecting quinolone are complex, expensive, laborious, and time-consuming. Immunoassay techniques, such as ELISAs, are commonly preferred as a simple, reliable and rapid method. BioVision’s Quinolone ELISA Kit is a competitive-based ELISA that can be used to detect both quinolone and fluoroquinolone in tissues, urine and serum. This detection kit offers ready-to-use reagents, and can quantify quinolone (0.12 – 10 ng/ml) within 90 minutes. 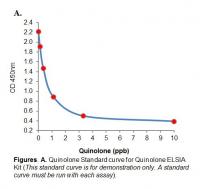