Acts as a transcriptional activator. Plays a role in terminal differentiation of interneurons, such as amacrine and bipolar cells in the developing retina. Likely to play a regulatory role in the development of the ventral forebrain. May play a role in craniofacial patterning and morphogenesis. 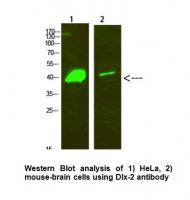