BMPs (bone morphogenetic proteins) belong to the TGF-beta superfamily of structurally related signaling proteins. Members of this superfamily are widely represented throµghout the animal kingdom and have been implicated in a variety of developmental processes. Proteins of the TGF-beta superfamily are disulfide-linked dimmers composed of two 12-15 kDa polypeptide chains. As implied by their name, BMPs initiate, promote and regulate bone development, growth, remodeling and repair. In addition to its osteogenic activity, BMP-2 plays an important role in cardiac morphogenesis. It is also expressed in a variety of tissues such as lung, spleen, brain, liver, prostate ovary and small intestine. 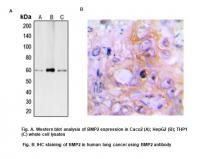