Antibody was affinity purified using an epitope specific to ASH2 immobilized on solid support. The epitope recognized by A300-489A maps to a region between residue 575 and the C-terminus (residue 628) of human Absent, Small, or Homeotic-Like 2 using the numbering given in Swiss-Prot entry Q9UBL3 (GeneID 9070). Immunoglobulin concentration was determined by extinction coefficient: absorbance at 280 nm of 1.4 equals 1.0 mg of IgG. 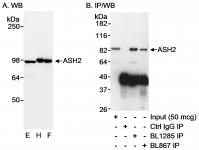 Detection of human ASH2 by western blot and immunoprecipitation. Samples: A. Whole cell lysate from HEK293T cells that were mock transfected (E, 50 µg) or transfected with ASH2 expression constructs containing HA-tagged ASH2 (H, 25 µg) or Flag-tagged ASH2 (F, 25 µg). B. Whole cell lysate from one 10cm plate of normal 293T cells (~1 mg protein; 1/2 of IP loaded/lane). Antibodies: Affinity purified rabbit anti-ASH2 antibody A300-489A used at 1 µg/ml for WB (A and B) and at 5 µg/plate for IP. ASH2 was also immunoprecipitated with rabbit anti-ASH2 antibody A300-107A using 5 µg/plate. Detection: Chemiluminescence with an exposure time of 1 second (A and B). 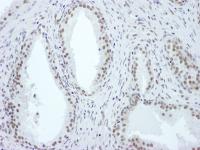